Which Spin on the Debate Was Better?

With an assist from RAPID Subtext automated ad-testing, we were able to produce scientific evidence of the impact of debate framing choices made by major networks, in less than 24 hours. We exposed a sample of over 1,200 US participants to 2 minutes of debate recap video from CNN and Fox News that were framing up the results for viewers/readers on Wednesday morning after the debate. In a simple pre/post scientific design, we measured attitudes toward each candidate before and after exposure to the 2 minute news clip. Gut level change in attitudes toward candidates are causal changes due to exposure to the framed news video.

The results are fascinating. Does the frame placed on the same event, produce different attitudes toward the candidates. Yes. Perhaps not surprisingly, the CNN clip provides a lift for Joe Biden on key Presidential attributes in this race, including caring and honest. Similarly, the Fox News clip provides a significant lift for President Trump on several key attributes. 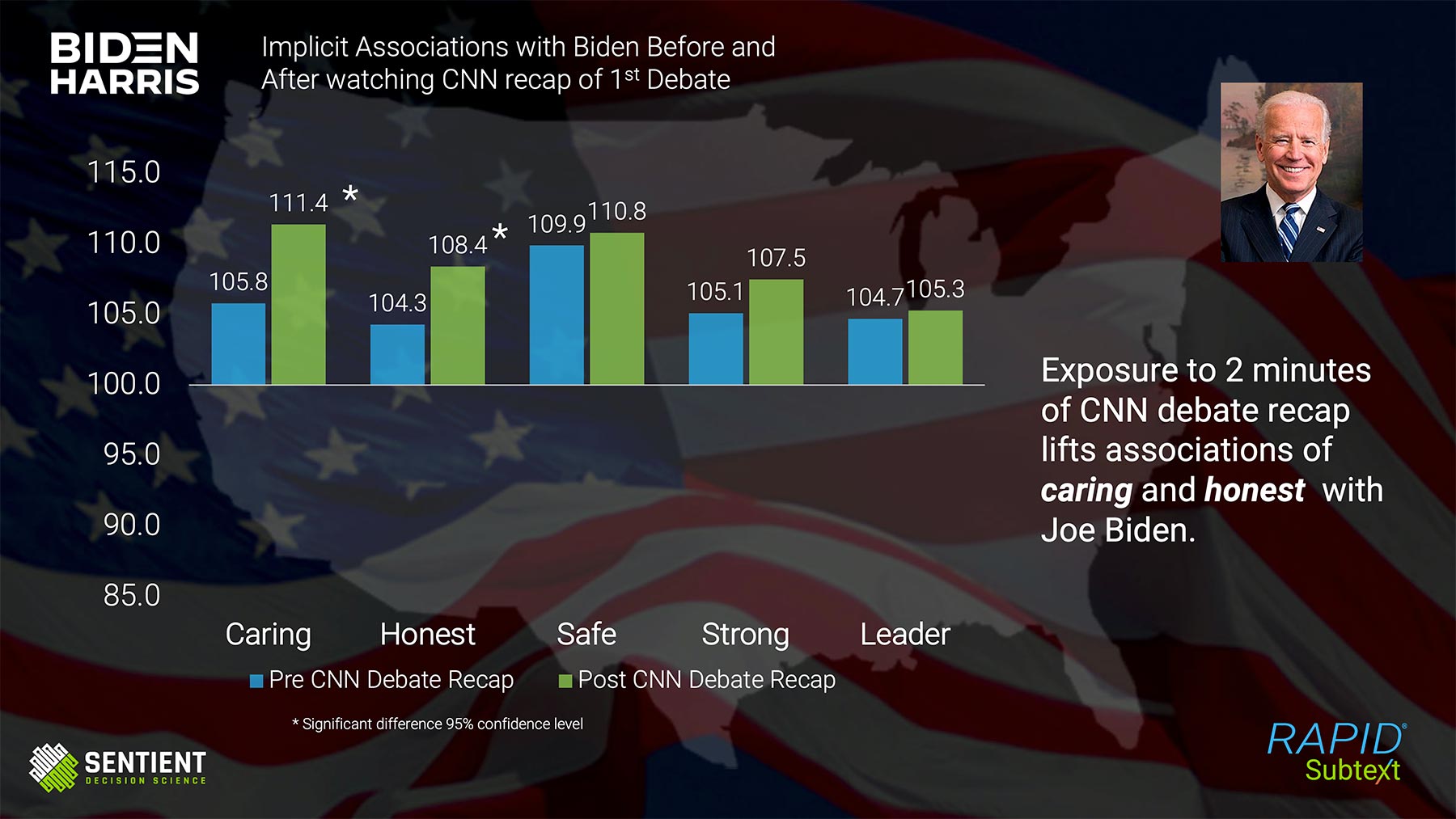 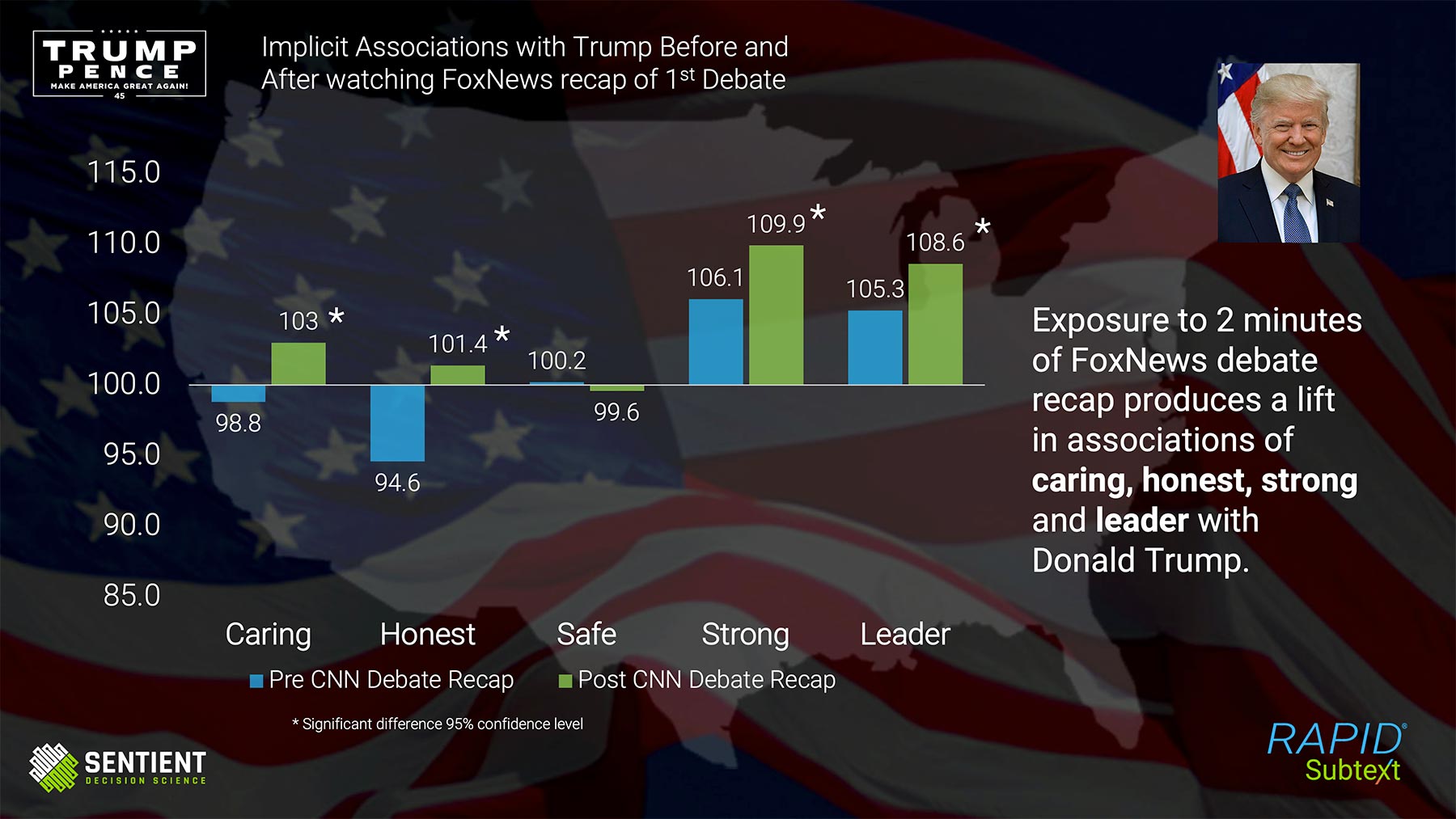 The Fox News clip focuses in on one key moment in the debate, and with an assist from the framing of the question by Chris Wallace, Trump is set up well to deliver on one of his most important talking points: the economy.  With so much focus on honesty, the Fox News choice of frame delivers a significant gift to Trump on that specific attribute..

The emotional reactions from the audience are telling. The moment where Trump begins reciting statistics of jobs being created, and emphasizing that Biden would “shut down the economy again”, we see a significant rise in positive emotion being expressed – especially among those who feel more positive about Trump after watching the clip.

However, even though the Fox News clip reinforces positive associations of Trump with strong and leader, exposure to the clip does not increase gut level reactions of “my vote” with Trump. In fact, even though it may have been the best focus for the clip, the recap of the debate, even by Fox News, benefits “my vote” associations with Joe Biden. 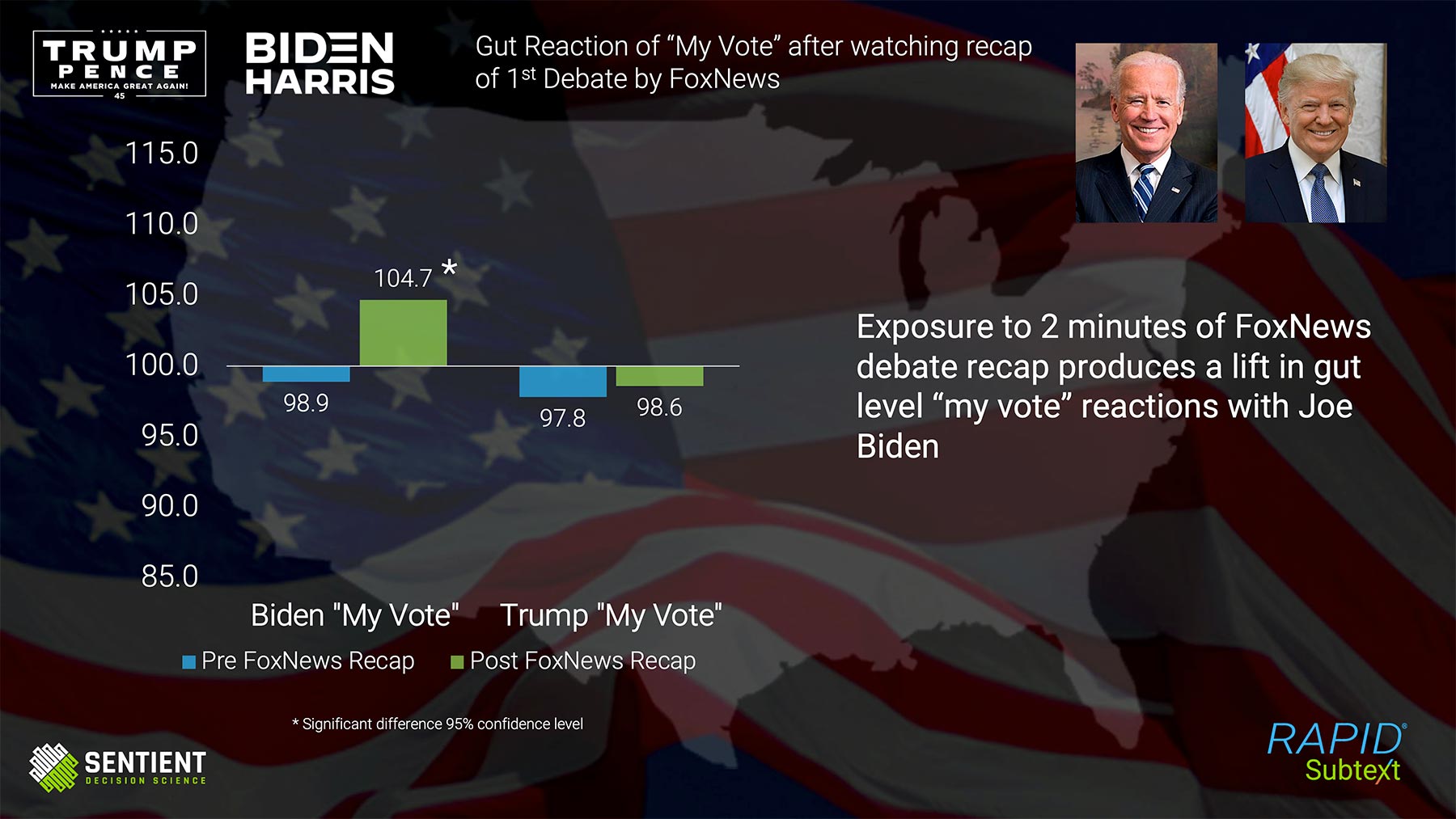 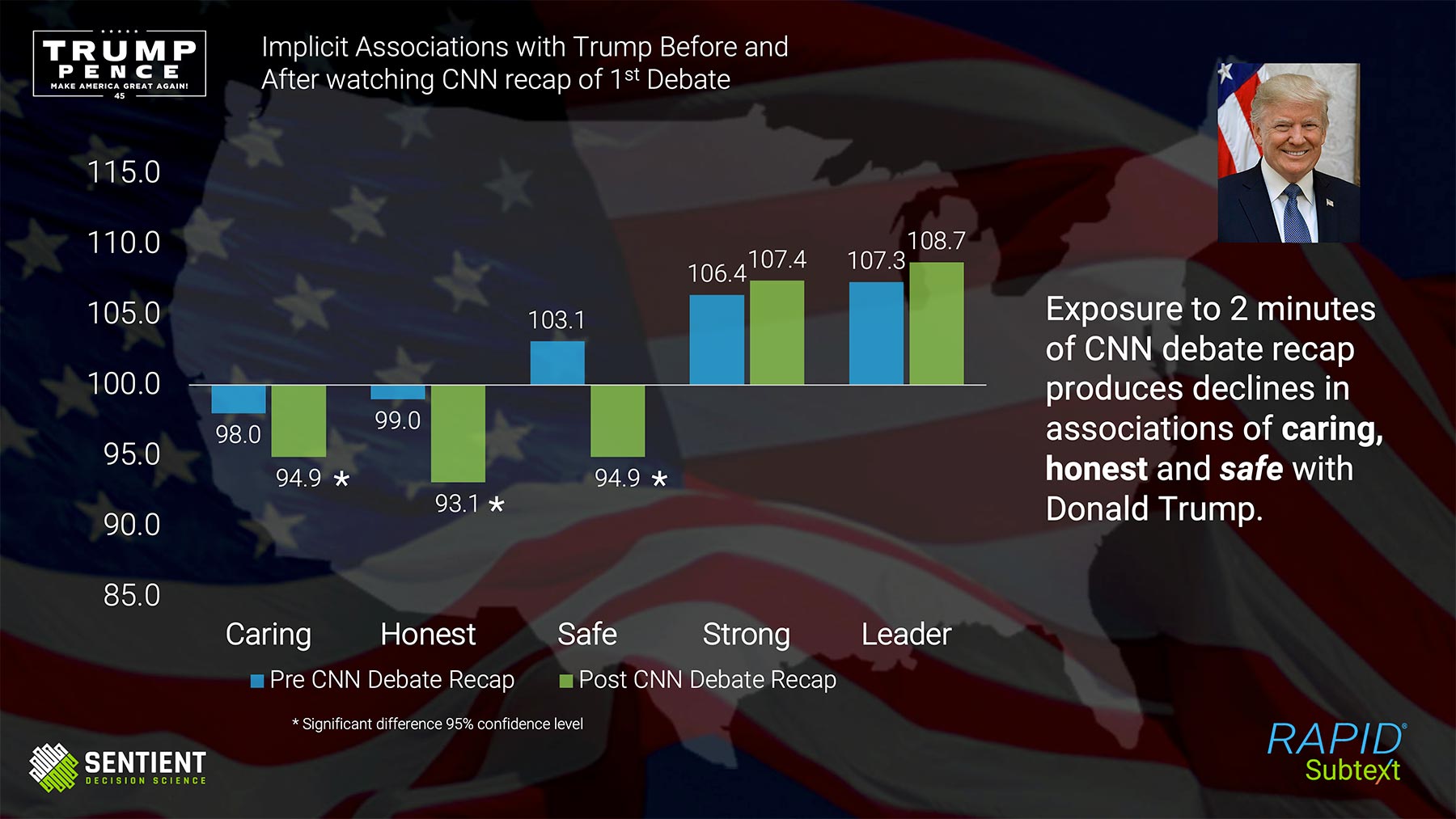 Implicit Associations with Trump Before and After watching CNN recap of 1st Debate. 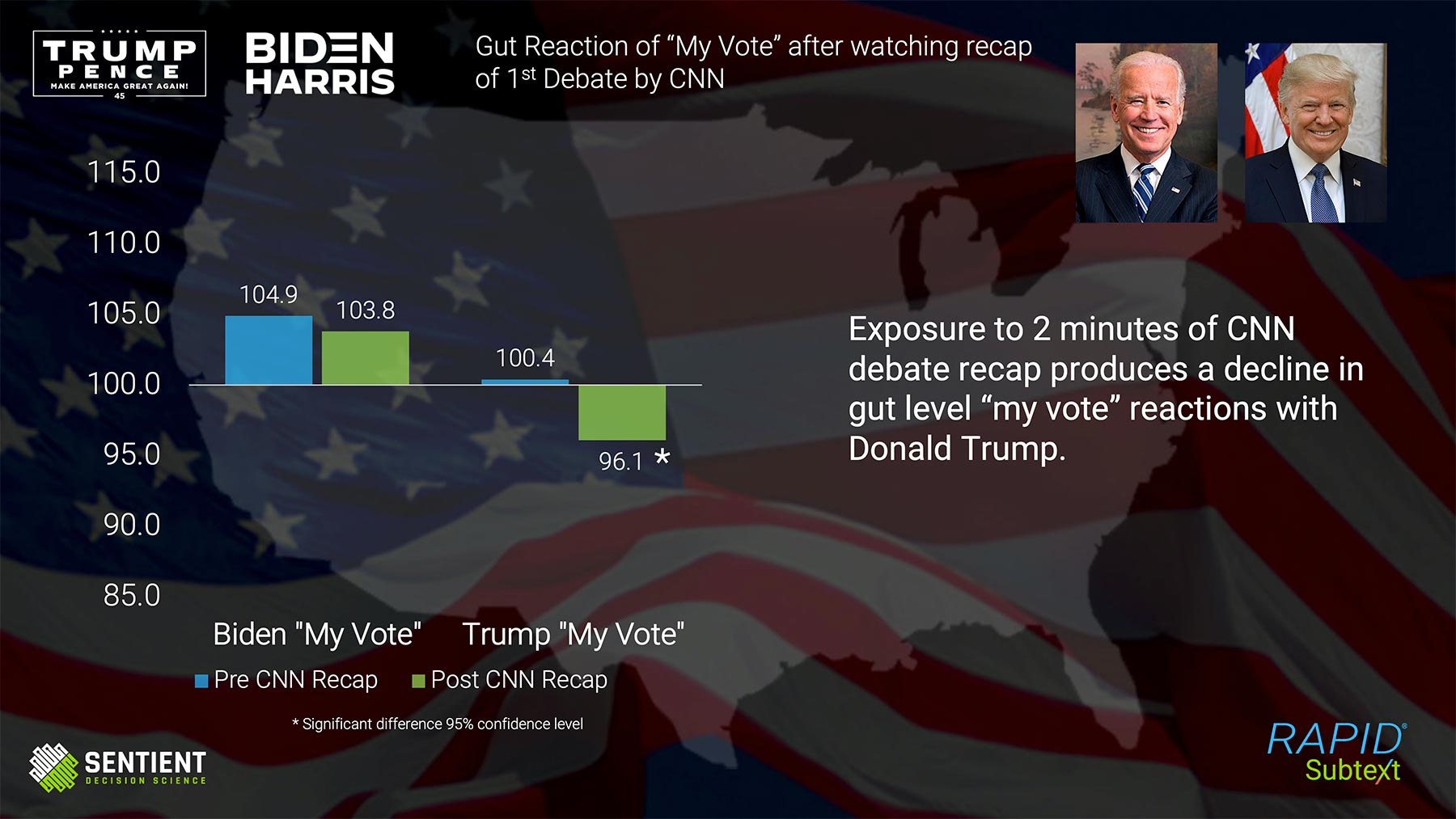 Gut Reaction of “My Vote” after watching recap of 1st Debate by CNN. 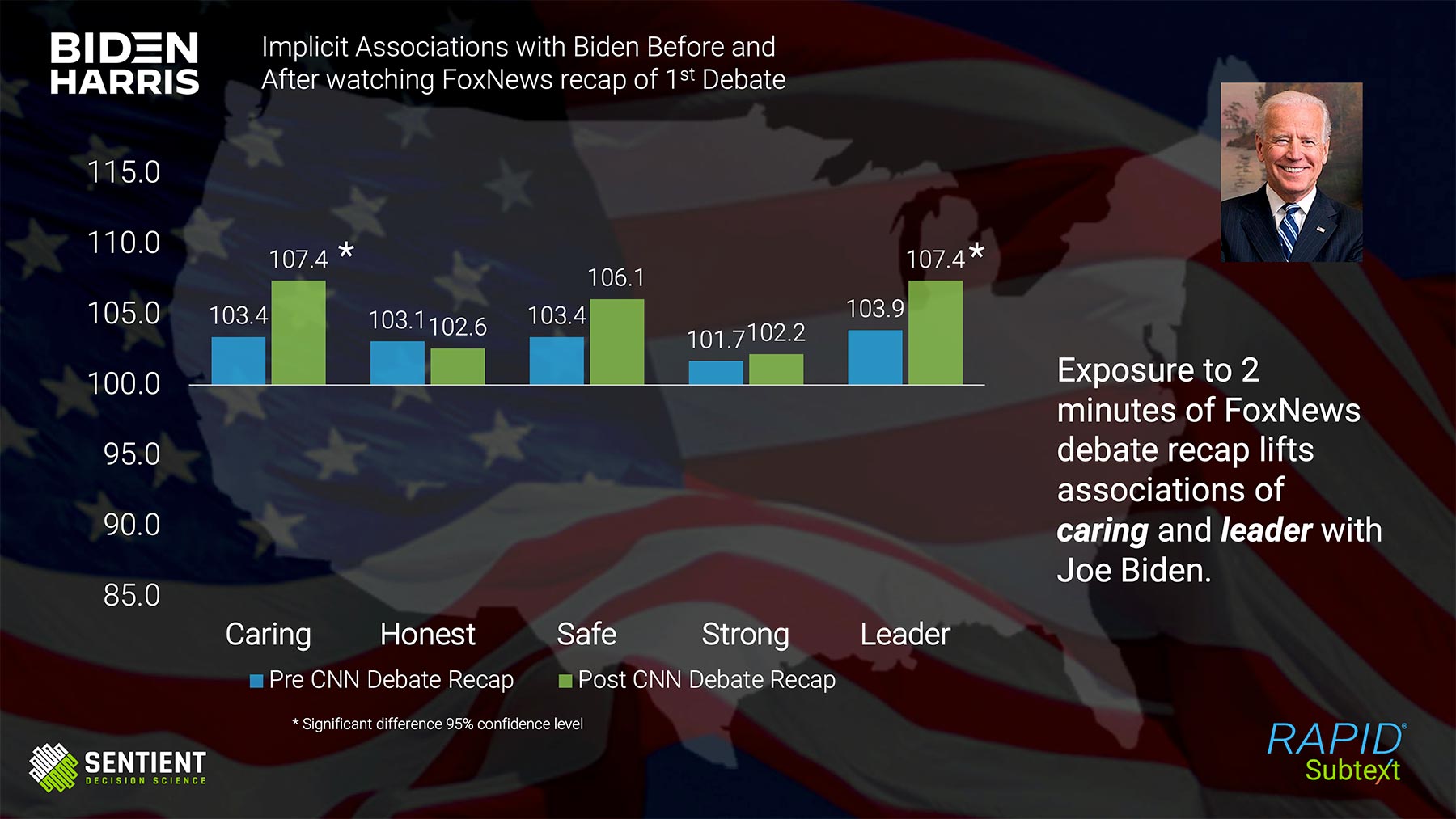 Implicit Associations with Biden Before and After watching Fox News recap of 1st Debate.

The 2 minute CNN clip strings together numerous scenes from the debate and in most of the scenes Biden is looking down or aghast or trying to break into the conversation while President Trump is interrupting and slinging insults. Exposure to this CNN clip does not increase likelihood to vote for Biden, however, it does draw pause in voters thinking about whether they would cast their vote for Donald Trump.

Key insights from these studies obviously include the identification of the talking points, and positioning that will help both candidates frame and spin the debate in their favor. These insights can help near term in framing debate perceptions, and also guide future market messages for greatest impact.

But for me, forever a scientist, perhaps the greater contribution of this work is raising awareness that automated behavioral science is real, alive and working on any researcher’s desktop. We don’t have to rely on the opinion of a few people to decide whether a video clip will be good for a candidate or a brand – we now have access to automated scientific evidence of the impact of our message framing.

We had our scientific evidence on these clips in 3 hours. Imagine how you could optimize your messaging if you had that kind of evidence at your fingertips in hours.

Behind the Scenes: Making Sentient Expression

Serving popcorn in pop-up movie theaters in Amsterdam and Austin. Glad handing new and old clients at our booths in London and LA. Giving away movie theater candy from San Antonio to Toronto. At the beginning of 2020, that was our plan. We kicked off...

A 2020 Love Story – Examining a Match Made In Hell

Ryan Reynolds and Taylor Swift join forces to create a new Match ad “Match Made In Hell”, that got over 2 million views on YouTube in the first week it appeared. A unique love story that could have only happened in 2020. The ad stars Satan himself...

CMO Club Roundtable – The Science of Knowing Your Customer’s Emotions

In these unprecedented and historic times, understanding and respecting your customers’ feelings has never been more important—or possible. Behavioral science is now a top research tactic used to give brands the ability to understand how customers...